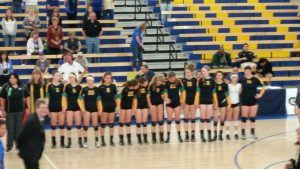 Sonora, CA — It was a nail biter to the end, as the Sonora High girls volleyball team won the Division IV 2014 CIF State Championship.

The Wildcats came out strong on the court in Orange, in Southern California and won the first two sets 25 -19.  Alta Loma came storming back, winning the next two matches, 17-25, 22-25.  The victory came in the fifth match with a 15 to 8 win over Alta Loma to claim the state title.