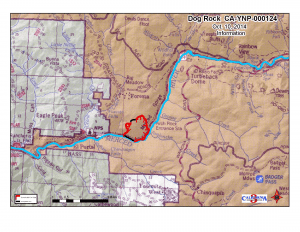 Yosemite, CA — The containment on the Dog Rock Fire has jumped to 54% and remains 311 acres.

Fire Officials report crews nearly completed mop-up along the north and northeast sections of the fire today.  Helicopters dropped water along the steepest portion on the east and west flanks of the fire.  Also, efforts continued along Highway 140/El Portal Road mopping up hotspots and cleaning the highway of debris. Overnight crews will patrol the highway and the northern area for the fire.

As reported earlier, a section of Highway 140 including the Arch Rock Station entrance will begin allowing traffic back into the park on Sunday morning at 8 a.m.

PG&E used helicopters Friday to re-installing some of the Yosemite Valley power lines damaged by the fire. Some customers have been without electricity for the past four days.

Also, as reported earlier, The 22 CAL Fire air tankers that were grounded after Tuesday’s deadly crash, are now back in commission. Fire investigators say the cause of the blaze is believed to have been metal sparks from a vehicle.

Current resources battling the fire include 565 firefighters and 3 helicopters in the air.