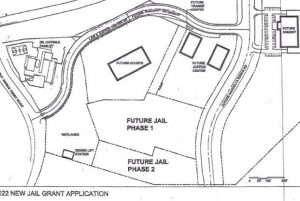 Sonora, CA — Tuolumne County will consider whether they can sell a small portion of the law and justice center property for a Transit Transfer Station. The Board of Supervisors will discuss an approximately .24 acre area located at the corner of Old Wards Ferry Road and Hwy 108 at their September 2nd meeting.

Executive Director of Tuolumne County Transit, Darin Grossi, asked if the county was interested in selling the land in July. Since then, the property has been surveyed and is reported as fitting the General Plan for the County and was determined to be exempt from CEQA review. The Board has to decide whether the property is surplus to the current planned projects which include: a jail, court house, justice center (administration offices), juvenile detention facility, and sheriff’s building.

The proposal states that the County Assessor, Ken Caetano, estimates value of the land (including infrastructure such as a road and other improvements that will be made as the Justice Center Campus is completed) is $250,000. County Administrator Craig Pedro says, “Proceeds from the sale of the property will go into the County Capital Fund to support future construction on the Law and Justice Center Campus.” The purchase price will help the project’s budget, a recent update on funding for the jail is here.

If the board approves the resolution to sell the land they will publish the intent publicly and then the Board will address the sales agreement in October.