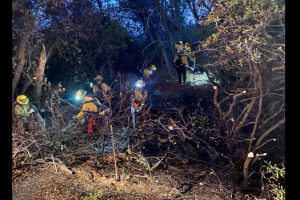 The first fire broke out in some grass at around 2:30 a.m. on Mitchell Mill Road near Blue Mountain Road in the Wilseyville area of Calaveras County. CAL Fire spokesperson Emily Kilgore details that when firefighters arrived on the scene the blaze was about two acres in size with the flames were moving at a slow rate of spread. The crews were able to stop the forward rate of spread in about 20 minutes.

The second ignited in some grass and timbers at around 3:40 a.m. in the Twin Pines Mobile Home Park off Wigwam Road and Highway 108 in the Jamestown area of Tuolumne County. That is just west of where the  Washington Fire ignited last week, as reported here. Firefighters were able to stop the forward rate of spread in about 15 minutes at a quarter acre.

Kilgore relays that there were no injuries reported in either fire and the cause of both blazes is under investigation.