Sonora, CA — Of the more than a thousand stories we have covered in the past twelve months the final return home of Sgt. Bobby Rapp was easily our choice for the top story of the year.

The Sonora High graduate was a member of the 82nd Airborne Division based out of Ft. Bragg, NC. On March 3 Rapp was killed by a suicide bomber while guarding a government building in the Sabari District of Afghanistan.

11 days later much of Tuolumne County came to a standstill in recognizing and paying final respects to the paratrooper who was returning home for the very last time. 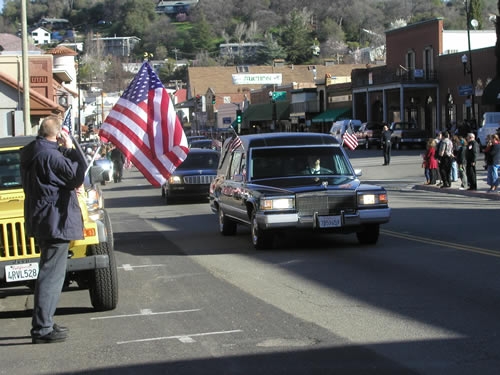 The day opened with a procession led by Viet Nam Veterans Post 391 from the Terzich and Wilson Funeral Home to Sierra Bible Church for the 10am Celebration of Life service. Mother Lode residents turned out en masse with their flags to pay their final tribute to the 22 year old 2004 Sonora High School graduate.

Sierra Bible Church was packed to overflowing. Many were forced to listen to the ceremony through speakers placed in the parking lot.

Following the service the procession traveled to Dambacher Cemetery. On Greenley Rd. they were saluted by the staff and students of Sonora Elementary in a moving tribute. 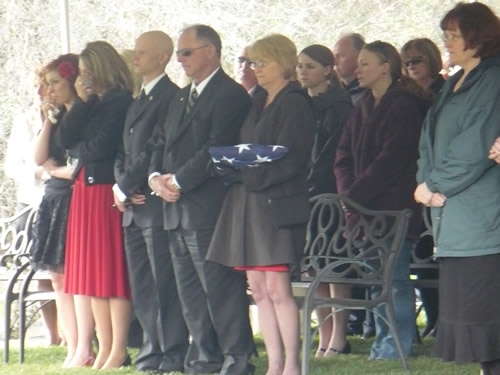 Once at the cemetary, Pastor Rick Larson from Sierra Bible Church spoke again with the majority of his comments directed to the immediate family. An Army chaplain comforted the family by sharing his thoughts concerning Bobby accepting Jesus Christ as his personal Savior during basic training.

The ceremony closed with the traditional 21 gun salute performed by fellow members of the 82nd Airborne and the playing of taps.