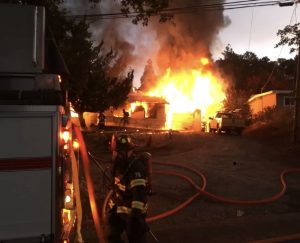 Update at 7:20 am: Fire officials say the flames have been knocked down on a house fire that ignited this morning in the 20000 block of Saratoga Road, near Banner Drive, in Sonora. It started shortly after 6:30am and put up a heavy plume of smoke. No injuries were reported, and an investigation into the cause of the fire is underway.

Original story posted at 6:45 am: Sonora, CA — There is a residential structure fire in the 20000 block of Saratoga Road, near Banner Drive, in Sonora.

First responders are arriving on scene to the blaze, which was reported shortly after 6:30am, and the structure is fully engulfed in flames. The person inside the residence was able to safely exit. Be prepared for activity in the area.