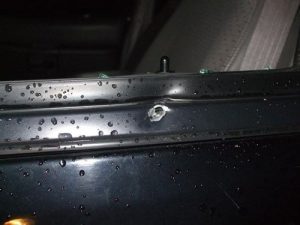 Sgt. Dave Seawell says the latest is a 55 year old male, who told deputies this afternoon that he was driving east on Hwy 26 yesterday near Vista Del Lago Road as an unknown vehicle approached from the opposite direction. The victim said he heard a loud bang and his vehicle’s windshield shattered. The victim stated he could not identify what type of vehicle the suspect was driving because the high beams were turned on. The victim did not suffer any injuries.

This is the sixth drive-by-shooting case reported to the Department. Sgt. Seawell says the Department has called in all available personnel to patrol the Valley Springs area.

The California Highway Patrol’s Special Investigation Unit has been called in to assist.

One victim described the suspect’s vehicle as a tan sedan. Anyone with information should contact the Sheriff’s Department at 209-754-6500.