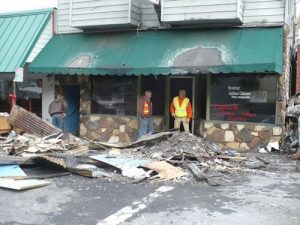 Sonora, CA – Traffic is again moving freely on Washington Street in front of the Bombay Restaurant.

A section of the road was closed down for nearly seven hours Tuesday as fire severely damaged the business and upstairs apartment at 301 S. Washington. Crews had to extinguish the blaze and remove items from the inside.

Fire Captain Todd McNeal says the cause is still under investigation. “It looks like it started somewhere on the second floor,” says McNeal.

The investigation is being carried out by CAL Fire and Sonora City Fire. No injuries were reported.