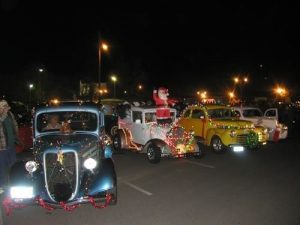 Sonora, CA — The 26th annual Sonora Christmas Parade with more than 70 entries this year is right around the corner.

Friday evening the parade will start promptly at 5:30 from the Red Church ending at Restano Way.

All eastbound traffic on Stockton Road will be stopped at Green Street and turned around. Eastbound traffic will be detoured up Forest Road, then up Bonanza Street. to Hwy 49.