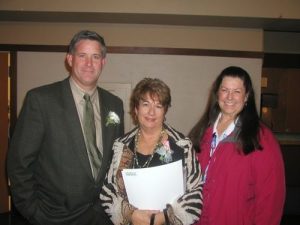 The 2009 Citizen of the Year Award was given to Ron Hamilton, who is a fifth generation Tuolumne County resident. Hamilton is the 4-H Tuolumne County Council President and Leader of the Tuolumne County Pioneers. He is involved with numerous other non-profit groups including Relay for Life and the Sierra Bible Church Faith in Action Ministry Team.

City of Sonora Community Development Director Ed Wyllie received the Excellence in Government honor. Wyllie could not attend the event, so his award was accepted by City Administrator Greg Applegate. Wyllie has worked for the city over the past 20 years.

Nancy Anderson of Twain Harte Elementary was given the Teacher of the Year Award. Anderson has taught for 33 years and is also a licensed daycare facility owner and director for children ages 5-14.

The night was also a time to introduce new members of the Board of Directors and thank outgoing members. 2009 Board Chairman Tom Berry handed the reigns to 2010 Chairman Carl Tucker.