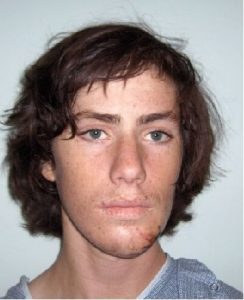 The CHP report stated that Larson was driving a 1999 Volkswagen Jetta over the 55 mph speed limit when he lost control of the vehicle and collided with two separate cattle fences and a wood picket fence. The vehicle ended up in the front yard of a private residence.

Larson suffered major injuries and was transported to Sonora Regional Medical Center. George, who was not wearing a seatbelt, was pronounced dead at the scene. A second passenger, 19-year-old Colton McTeer of Mokelumne Hill, was not injured.

The CHP says Larson was determined to be intoxicated. Once at the hospital he was placed under arrest and charged with felony DUI and vehicular manslaughter.

According to Prosecuting Attorney Jim Newkirk, "What the court and the jury would have to decide with gross negligence is that he (Larson) was aware of the risk that he consciously decided to disregard the risk and that he did it anyway. In this case the traffic violation that resulted in the death was essentially speeding and speeding and an unsafe turning movement and things like that do not amount to gross negligence."

Newkirk added that the maximum prison time Larson could receive is four years. Had Larson been charged with gross negligence he could be sentenced to 10 years in state prison.

George’s death marked the 17th traffic related fatality of the year in Tuolumne County. An arraignment date is pending.