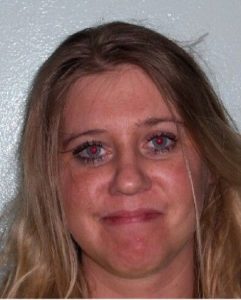 Sgt. A.J. Ford with the Sheriff’s Office says deputies were dispatched to a report of a domestic disturbance at 10pm in the 18000 block of Carter St. in Tuolumne.

Prior to arriving at the home, deputies were told that the suspect, 33-year-old Maryellen Wagoner, left in a black Toyota Four Runner. Deputies located her vehicle near the intersection of Pine St. and Carter St., and pulled her over the side of road. But after a deputy made initial contact with her, she sped away in her SUV.

An eight mile high speed chase followed through Tuolumne and into east Sonora. Speeds reached 100 mph at times. Wagoner’s tires were blown out by spike strips set up by the CHP along Tuolumne Rd. near the intersection of Wards Ferry Rd.

Wagoner continued until she reached the parking lot of the Peppery restaurant along Mono Way. Sheriff’s deputies had to physically remove her from the vehicle in order to place her under arrest. She was then taken to Sonora Regional Medical Center to be treated for minor injuries due to the confrontation.

She has been arrested for felony evading, suspicion of felony domestic violence and suspicion of driving under the influence.