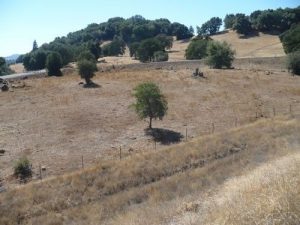 Sonora, CA — By a 4-0 vote moments ago (Board Chair Teri Murrison is out of town) the Tuolumne County supervisors passed the proposed financing plan for the purchase of the property for the Law and Justice Center.

CAO Craig Pedro had proposed an internal financing plan that would allow the county to borrow from itself thereby saving between $2.4 to $4 million in interest payments to purchase the 43 acres from the Gardella family for the land located south of Hwy 108 and east of Old Wards Ferry Rd.

Pedro has proposed that the Criminal Justice Construction Fund be used as the initial source of funding for the $4.1 million that will be paid for the property. Any funds remaining following the design fees for the Juvenile Detention Facility would then be used to retire a portion of the $4.1 million debt. Pedro believes that amount will be in the neighborhood of $600,000 lowering the debt to $3.5 million.

While Supervisor John Gray had a number of questions for Sheriff Jim Mele, CHP Commander Lt. Sam Samra and Chief Probation Officer Adele Arnold, his peers (Dick Pland, Liz Bass and Paolo Maffei) were adamant that, as Craig Pedro has stated, "This is no time to blink."