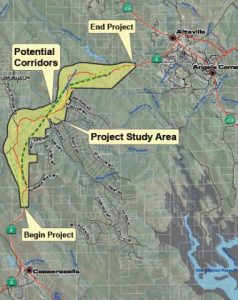 Angels Camp, CA — The Calaveras County Council of Governments and Caltrans are now in the initial stages of the Hwy 4 Wagon Trail Realignment Project.

To that end a community workshop to discuss potential corridors, issues and opportunities for the project will be hosted by the Copperopolis Armony Thursday, November 19 from 6-8pm.

The project will cover approximately four and a half miles of the roadway that features severe curves and no shoulders. Intersecting roads would include Pool Station, Appaloosa, Hunt Rd., and Stallion Rd.

According to Council Executive Director Tim McSorley Caltrans will be working with an Australian developed software entitled Quantum. A number of parameters including design speed, curvature of the roadway and any cultural and/or biological resources that should be avoided will be entered into the program. Quantum will then provide a number of project alternatives.

Initial funding for the project will be provided by the federal government through two funds; Public Lands Highway and High Priority Project. Also to be used a state transportation improvement program MATCH to the tune of $250,000. No final estimate has been tabulated but McSorley says the total project cost could amount to $40 million.