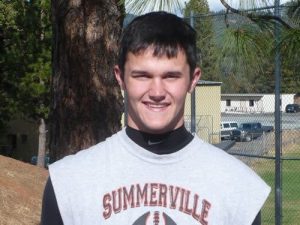 In just six games the 6-3, 190 pounder has thrown 18 touchdown passes. In the last two games he has six scoring strikes, five of those coming last Friday evening in a 20 point win over Bret Harte.

Head Coach Ben Watson feels Roberson has a great opportunity to play college. He adds, “I think he needs to put a little bit of weight on and gain some more strength.”

Roberson is thankful he has such a great offensive line that is giving him plenty of time to pick out his receivers. He comments, “I’m really not that surprised that we’re doing so well.  We really worked hard in the off-season preparing for this year.”  As for Argonaut on the road this Friday (Jackson), “They’re the real deal.”

Post Summerville High, “Yes, I would really like to play on the next level. I’ve already received some initial inquiries from Stanford, Washington, Arizona State, San Diego State and the University of Georgia. I’ll just wait until the season is over and see what I can find out about all these schools.  I really think I would like to stay pretty close to home.”