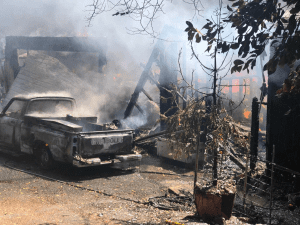 Update at 2pm: CAL Fire spokesperson Emily Kilgore reports that the dubbed “Monte Fire” at a home on at 17115 Monte Grande Drive in the Soulsbyville area has now been contained, with a quarter section of the home damaged.  The flames also spread to about a half-acre of vegetation nearby, but crews had knocked that down about 15 minutes before.

What sparked the blaze is under investigation. The home’s sole occupant, a male, was at the property when the flames broke out, but Kilgore didn’t know if he was actually inside the home at that time. The Red Cross is assisting that person. Crews will remain on scene mopping up for several hours. Also assisting with the blaze were Twain Harte Community Emergency Response volunteers. Further details regarding the fire and a power outage in the area are below.

Update at 1:30pm: CAL Fire reports that firefighters have fully contained the vegetation fire at around a half-acre and the house fire is 80% contained at this time. Additionally, PG&E reports power has been restored to all 1,328 customers that were without electricity in the area. What sparked the blaze is under investigation.

Update at 12:20pm: Firefighters from across the county are making progress knocking down the house fire at 17115 Monte Grande Drive, as well as the vegetation fire estimated to be around a ½ acre. CAL Fire reports that the overall incident is 50-percent contained. You will want to continue to avoid the area. There have been no injuries related to the fire. The American Red Cross is responding to assist the home’s occupant.

Update at 12:10pm: Power is out in a wide area of Tuolumne County as a result of a house fire that ignited late this morning at 17115 Monte Grande Drive. The fire has also burned approximately ½ acre of vegetation. PG&E reports that 1,328 customers are without electricity following the fire. Summerville High Superintendent Michael Merrill has alerted Clarke Broadcasting that the outage is impacting the school, but he says classes will continue as planned, and students will dismiss at the regular time.

Update at 11:55am: The Tuolumne County Sheriff’s Office reports that deputies are on the scene of a house fire at 17115 Monte Grande Drive. There are no mandatory evacuation orders, but officials are making some of the neighbors aware of the incident. The Sheriff’s Office asks that residents avoid the area so that emergency officials can make access quickly.

Update at 11:40am: Giving an update on a house fire on Monte Grande Drive, CAL Fire spokesperson Emily Kilgore says there is a fully engulfed structure and it has also burned approximately 1/2 acre of vegetation. Crews are just arriving on scene.

Original story posted at 11:28am: Soulsbyville, CA — Officials are responding to a report of a residential fire in the 17000 block of Monte Grande Drive near Soulsbyville.

Air resources from Columbia are flying overhead. It is near the intersection of Mt. Side Drive. We’ll pass along more information when it becomes available.