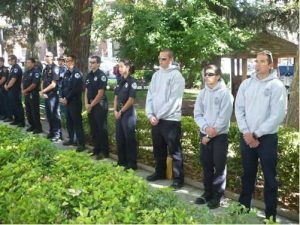 Sonora, CA — Firefighters who made the ultimate sacrifice throughout the country and the Mother Lode were remembered during the noon hour today at the Firefighters Memorial Ceremony at Courthouse Park.

The three bells sounded the firefighters end of watch.

Supervisor Teri Murrison’s brief comments were followed by the bagpipes, Tapps and the retiring of the colors.