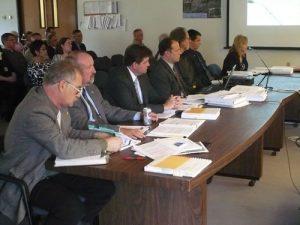 The $253 million center will be built in phases off Old Wards Ferry Rd.

"I think the Board made the right decision," says CAO Craig Pedro. "I think it will really benefit the community in the long run."

Murrison indicated that questions regarding financing played into her decision.

"The most significant cost that we have not quantified is the cost to the citizens of the county," stated Murrison. "We know what the cost will be in terms of pavement and bricks and mortar, but we don’t know how much we are going to require the citizens of this county to pony up, and that’s a problem."

Supervisor Paolo Maffei stated, "I see this as funding a necessity." Maffei added that he is confident in CAO Craig Pedro and county staff who have become accustomed to working with a limited amount of funding and have shown a high level of "fiscal conservatism" over the years.

Supervisor Liz Bass also spoke in favor and motioned to approve the Draft EIR. It was seconded by Supervisor Dick Pland.

Many from the law enforcement community were on hand to speak in favor of the project. It will include a county jail, sheriff’s facility, juvenile detention center, superior courts and CHP office.