Law And Justice Center Will Go Before Supervisors 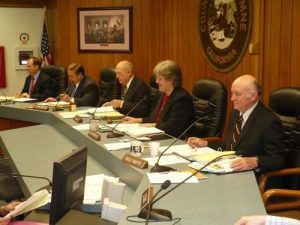 Sonora, CA — The Draft Environmental Impact Report for the Tuolumne County Law and Justice Center project will go before the Supervisors Tuesday.

The $253 million facility off Old Wards Ferry Rd. would house a county jail, sheriff’s facility, juvenile detention center, superior courts and CHP office. It would be built in multiple stages.

On September 2nd, the Planning Commission recommended approval of the project with a 5-2 vote. The Supervisors will hold a public hearing at 1:30pm.

Also on Tuesday the Supervisors will vote whether to extend the employment contract of CAO Craig Pedro for five more years. If approved, his contract would run from November 1st, 2009 through October 31, 2014.