Missing Hunter Is Missing No Longer 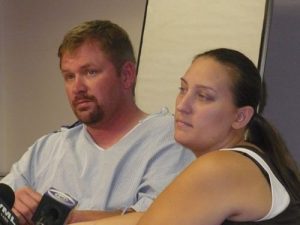 Despite the fact that there were 50 plus search and rescue personnel northeast of Arnold, Smith was met by two other hunters at 12:30pm today on a Forest Rd.

He was driven to the Forest Service office in Dorrington. An ambulance then transported the UPS driver to Sonora Regional Medical Center.

Smith underwent a battery of tests at Sonora Regional Medical Center and was found to be dehydrated and in a mild state of starvation. Since going missing Monday evening when he took a wrong turn he had eaten but two granola bars. He admitted that he still had one in his backpack. He added that he was always able to find water.

Smith commented that he was never frightened, never bothered by wild animals and was always confident that he would survive. He stated, “I wasn’t going to let the forest beat me.”

Asked if he would ever go out alone again, his fiancé Sabrina Headley quickly jumped in with an emphatic “No.” A member of the media then suggested that he might be receiving 20 GPS units for Christmas for which Smith commented, “I could certainly live with that.”

Smith may be hospitalized for a day or two just to be stabilized. He and Sabrina are still planning on their October 17th wedding.  Smith is a widower with two daughters while Headley is a widow.