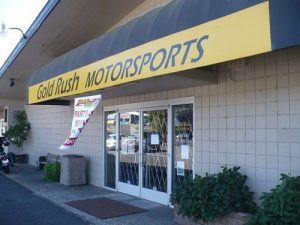 Sonora, CA — Gold Rush Motor Sports on Mono Way near Indian Rock and just east of the Junction Shopping Center closed its doors to the public this morning.

Store Manager Rick Deschamp says the closure is due to the economy. “Since August we have only sold two bikes and both of those were under $2,000. They were purchased for grandchildren.

Not so long ago we were over 20 employees. We had to let about half of them go and now we’ll have to cut the other 10 loose. Some have already found work. Our book keeper will make a move to an insurance company. There will be about three that will have to find jobs.”