Yosemite Fund Makes It Easier To View Half Dome 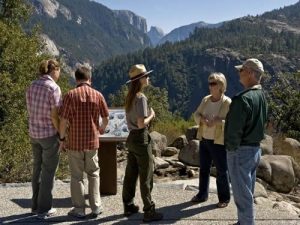 Yosemite, CA — The Half Dome overlook in Yosemite National Park has recently received an $800,000 redesign and rehabilitation.

Rather than having to park a vehicle along a dirt road, visitors can now enter a well organized parking area and follow new pedestrian walkways to the overlook.

Paths now meet accessibility standards and new exhibits help educate visitors about the park. The project also included the rehabilitation of paths that had eroded due to overuse.

The rehabilitation project was funded by the non-profit Yosemite Fund.