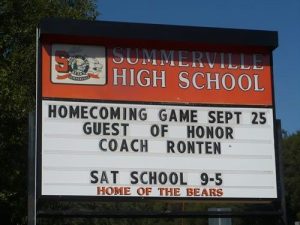 Sonora, CA — The Sonora High Wildcats are hoping to maintain their unblemished record when they travel to Johansen to meet Grace Davis this evening.

In their back-to-back wins the Wildcats have averaged 35.5 points per game while allowing only 14.5 points per outing.

Head Coach Bryan Craig admits he’s not surprised by the record but he adds, "We’re certainly scoring more points than I thought we would at the start of the year. We still need to improve our passing game and special teams in the area of kickoffs. I really like our defense … our kids really play hard."

At Summerville it’s Homecoming weekend after playing two in a row on the road. The 1-1 Bears will be hosting DeNair.

The Wildcats’ game will be broadcast on STAR 92.7 at seven o’clock while the Bears’ contest will be heard on Today’s Country, 93.5 KKBN at the same time. Both game will be audio streamed live on myMotherLode.com.

1-1 Bret Harte travels to Hughson … 1-1 Calaveras also hits the road to take on Ceres and the Oakdale High Mustangs will host Whitney.