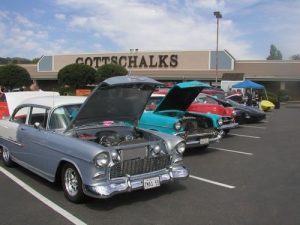 Sonora, CA — The parking lot of the former Gottschalks store was filled once again for the Tuolumne County Chamber of Commerce’s annual Wing Ding Car Show and Grape Stomp.

A team of Daniel Lewis and Robbie Gillen from Sierra Pacific Industries took first place in the Grape Stomp competition.

“I think last year we were in third place, so first is where we wanted to be this time,” says Gillin. “It is great to come out and support the Chamber of Commerce at this event. It is a lot of work to put an event like this on every year.”

This year’s Wing Ding also featured a Pit Crew Challenge in which teams worked to change the tires of a race car. The winning team from Doherty Tire included Mike Elgin, Tyler Alexander and Jose Neri.

Chamber President and CEO George Segarini says, “I think the folks out here are enjoying the nice weather and all the cars and activities.”

2009 marked the second straight year that the event has been held at the Junction Shopping Center.