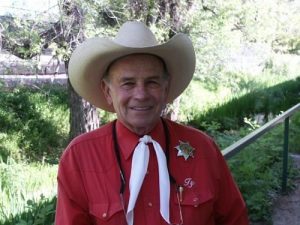 After thirteen years on the Tuolumne County Planning Commission, Ty Wivell announced his retirement last month. His reward? On October 3rd, the long time Tuolumne County resident will be roasted for all of his past actions, efforts and personality traits.

Wivell was Friday’s KVML “Newsmaker of the Day”.

Ty Wivell is a fifth generation “Tuolumne Countian” on both his paternal and maternal sides. The Cholez’s on his mother’s side were the first French family in Tuolumne County. The families had owned ranches in the Mountain Springs, Campbell Flat area and in Stent and Coulterville. Born in 1933 to Jack Tyrus Wivell and Isabel Cholez Wivell, the eldest of five children, Ty attended school in Sonora from kindergarten through high school graduating in 1950. He was student body president and lettered in football and baseball and won numerous academic awards. He was one of the original members of Sonora 4H.

Wivell has had a lifetime love affair with horses and ranching and received his first horse at a very young age which he raised, broke and rode for 20 years. He attended college at University of California, Berkeley, interrupting his schooling for a stint in the US Army for two years and returned to complete his schooling and graduate from UC Berkeley in 1959.

While in the service in the State of Washington, he and some fellow infantrymen from Sonora started an Army Rodeo Team and got their weekends off to participate in local rodeos.

Ty had a variety of jobs from grammar school through college, including a paper route and yard work in downtown Sonora, milking cows at Liljedahls dairy, working at various ranches and pack stations, working at Pickering Lumber and for PG&E. Ty married while in the service and had three children supporting the whole family while continuing at UC Berkeley until his graduation. He went to work for a CPA firm and a trucking company and eventually went to work for Great Western Savings. He remained at Great Western for 30 years. He married his wife, Toni, in 1968. She had two children and they raised five other children together in southern California where Great Western Savings was headquartered. Needless to say, the family of seven came to the Mother Lode Round-Up every Mother’s Day (where Ty volunteered his help at the rodeo) and made almost every Posse camp out at Kennedy Meadows for the next 23 years. Ty’s Uncle and three brothers were all Posse members at various times (Uncle Ray Cholez, brothers Ken, Newt and Doug) during those 23 years.

The Wivells moved back to Sonora in 1991, having bought a ranch on J-59 for a cow/calf operation which they are still running. Ty joined the Tuolumne County Sheriff’s Posse that same year and became rodeo chairman in 1992, and has continued as such since then, with the additional job of General Chairman along the way.

Wivell says that he has reached a point in his life where he would like to spend more time with his family including his wife, children, grand-children and be able to travel. He insists that his health is good.

The “Ty Wivell Celebrity Roast” will be held Saturday October 3rd at the Sonora Opera Hall. The evening begins with a no-host bar social hour at 5:30 followed by dinner at 6:30pm. The Roast immediately follows dinner. Tickets are $30 per person or $50 per couple and are available by calling Sonora High School at (209) 536-2009. Proceeds will go towards the high school’s “Trek for the Track” campaign.

Written by mark@mlode using the assistance of several dusty biographies that had been stored away for the past half century or two.