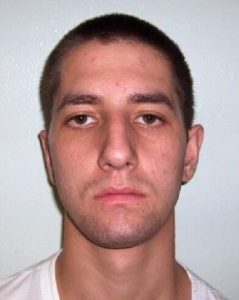 At 1:30am Tuesday a homeowner was awakened by two subjects in his yard in the 600 block of S. Stewart St. He later determined the subjects had entered his enclosed patio and removed several items.

An hour later in the 400 block of S. Barretta St. a resident heard noises from her kitchen. When she entered the kitchen a male subject escaped through the back door of the residence after removing several items.

At 3:30am in the 700 block of S. Barretta St. a resident heard voices/noises inside his residence. He located a male subject hiding in a closet. When the resident confronted the subject the male individual brandished a knife and ran out of the residence with several items.

The resident was later able to identify 18 year old Cody Fallo from a photo lineup.

At 6:55 Tuesday evening officers were investigating still another burglary in the 500 block of S. Barretta St. While one officer was taking the report another officer located Fallo and a 17 year old juvenile a few blocks away from the most recent burglary. Both were in possession of stolen property.

This investigation is continuing and additional charges are expected to be filed against one or both of the subjects.