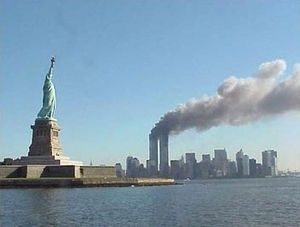 Sonora, CA — A number of Mother Lode community leaders spoke out today on their memories of the September 11, 2001 terrorist attacks in New York City and Washington, D.C.

Calaveras CAO Bob Lawton was in Brooklyn that day serving as a side to a New York state senator. He recalls that one of the staff members started watching the horror on CNN. They immediately closed the office and retreated to a private residence. Lawton remembered on the walk he navy colored jacket took on a grey cast from the ash as the twin towers collapsed. A note of irony, Lawton conducted business at the World Trade Center 24 hours prior to the attack. Stated Lawton; “It was a profound experience … something that changed our lives forever.”

CAL Fire Tuolumne-Calaveras Unit Chief Mike Noonan was fighting the Darby Fire in Calaveras County that morning when he learned of the attack. “It was obvious from the onset that we had lost a lot of the fire service that day and the impact was felt immediately and it’s still felt today and I don’t think those feelings will ever go away.”

Tuolumne County Chamber of Commerce President/CEO George Segarini was watching television before leaving for work. “It was horrific … I was feeling the country was really under a major attack at that point. I was afraid of what might come next.”

Tuolumne County Health Officer Dr. Todd Stolp, “I was up early that morning doing art work in my studio when my wife Martha told me I better come up and start watching television. Unreal was the feeling. The immediate thought was having to do with concern for the people that were there and a sense of responsibility to make the most of the day.” At the time Dr. Stolp was the medical director for the MACT Indian Health Program.

Sonora Police Chief Mark Stinson was a member of the law enforcement community in Shasta County at the time of the 911 attacks. “My feelings were a combination of horror, disbelief and anger at what had happened to our country.”