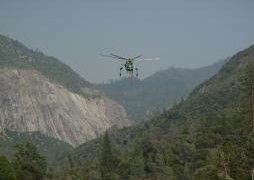 Ranger Scott Gediman comments that resources may alter slightly today as a number of firefighters and equipment are being relocated to southern California and the Station Fire. Today’s resources include 24 hand crews, 94 engines, 12 water tenders, six dozers, eight helicopters and six air tankers. Approximately 900 personnel are on site today.

Cost of fighting this fire is estimated at $5 million.

The fire is moving in a north-north easterly direction from the Crane Flat area toward Tamarack Flat and Tioga Rd. At this juncture Tioga Rd. remains open to the public but may be temporarily closed at any time.

A public meeting is scheduled for this evening at 6:30 at the El Portal School.