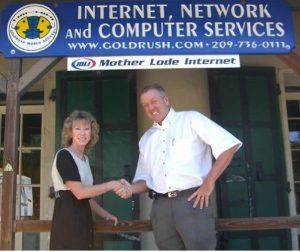 Sonora, CA — Mother Lode Internet of Sonora and Goldrush Internet of Angels Camp have joined forces in an effort to strengthen internet service in the foothills of northern California.
From Ben Hulet of Mother Lode Internet, “The combination of our teams will mean stronger local service with new and wider coverage areas. Customers can still talk with their favorite local technician or customer support specialist.
Subscribers will benefit from expanded DSL with better performance with bandwidth as well as an expanded wireless network, new e-mail services, community messaging, web hosting, networking and PC support. In other words Mother Lode/Goldrush will become the area’s full-service, one-stop source, a “total internet solution” for all internet-related needs.”
According to Lynda Tusoni of Goldrush Internet, “Things will remain the same, however service and support will expand by harnessing the best of both companies.”
Hulet adds that no jobs will be lost for current Mother Lode Internet and Gold Rush Internet employees.
Written by Bill Johnson.