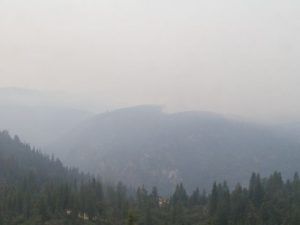 There were reports earlier in the day that the fire had grown to 2,600 acres, but Spokesperson Kari Cobb says the number is actually 2,244.

Cobb says, “Luckily the wind was in our favor overnight, and there was not much activity on the fire.”

By the end of Friday, Cobb says around 1,000 firefighters will be on scene. The fire remains at 10 percent containment.

To view a webcam shot of the fire click here.