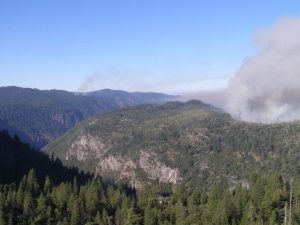 Yosemite National Park, CA — The Foresta Big Meadow Prescribed Burn is now classified as an "out of control" fire covering 498 acres as of Wednesday evening.

According to Yosemite Fire Information Officer Gary Wuchner the fire’s Incident Commander (IC) decided Wednesday evening to evacuate all Foresta residents. Those residents are being accomodated in El Portal. Also the Crane Flat Campground has been evacuated for precautionary reasons.

Wuchner adds that "spotting" has been the greatest cause of the fire spread. In fact there is now a second fire below Yosemite West across the river. Private residences are now considered threatened. The fire is now moving in a west-north westerly direction.

By Wednesday evening more than 100 firefighters were on the lines. Aircraft will be on site first thing this morning.