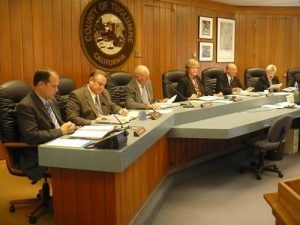 The Board approved the budget with a 4-1 vote. Supervisor Liz Bass was the lone dissenter. The budget is $8.5 million less than what was approved a year ago, and it includes a reduction of approximately 100 staff members.

A portion of the jobs will be picked up by the private sector with the privatization of services such as V.N.A. Hospice.

CAO Craig Pedro told the Supervisors that the county will receive some funding it was not expecting to receive when the preliminary budget was first approved. Notably, $1.83 million in Proposition 1B state money and $814,000 in federal equipment funds are coming to the Road Fund. The Capital Improvement Fund will have an additional $145,505 after re-budgeting the ANF Building Design Work and $386,600 for re-budgeting the Groveland Youth Center Project.

As part of the final budget, the Recreation Department will be able to continue operations.