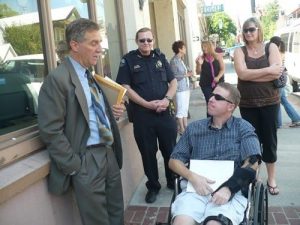 Sonora, CA — Peter Loren Barrett has been sentenced to three years in prison for leading Sonora Police Officer Jeff Aitken on a high speed back on May 16th, and causing serious bodily injury.

"My opinion is that he (Barrett) does not fully recognize the magnitude of what he did," says District Attorney Donald Segerstrom, who was the prosecuting attorney. "I think he is beginning to get a glimmer of it, and I am very hopeful that as he serves his prison term, he will realize it even more."

Officer Aitken, who suffered serious injuries in a crash while chasing the 20-year-old Barrett, was in the courtroom Wednesday.

"I think ultimately I’m very happy that this is over and I can have some sense of closure," says Aitken.

The sentence was handed down by Judge Eleanor Provost.