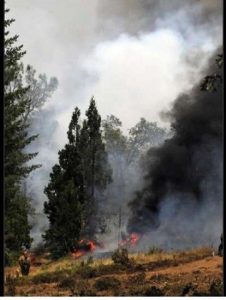 Sonora, CA — 100 percent containment has finally been reached by firefighters in the 18 day old, 6,130 acre Knight Fire in the Stanislaus River Canyon.

Pat Kaunert of the Stanislaus National Forest reports that only nine firefighters remain on hand to patrol the perimiter to check the "smokes" on the fire’s interior.

Kaunert adds that not a single structure in the Mt. Knight subdivision was damaged by the blaze that started during the three o’clock hour, Sunday, July 26. Six firefighters have suffered minor injuries.

It may take several weeks, perhaps even a month before the fire is considered "controlled" which would mean that all flames and smokes have been extinguished.

The cost of fighting the Knight Fire to date is $11.9 million.