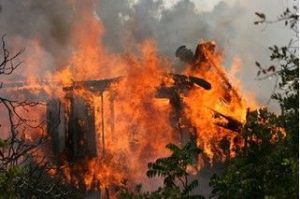 Columbia, CA — According to CAL Fire Battalion Chief Dave Rowe the fire that completely destroyed a two story residence on Valparaiso off Parrotts Ferry Rd. was accidental in nature.

The first alarm was sounded at 3:27pm. By the time firefighters arrived the structure was fully involved. A vehicle valued at $25,000 was also destroyed. In addition the fire burned approximately half an acre of vegetation.

According to CAL Fire Communications Operator Jim DeVoll the fire was contained at 6pm with resources departing the scene at 10:25pm.

No injuries were reported to either residents or firefighters. Cause of the fire was electrical. The residence was valued at $350,000.

The home was owned by the wife of former Calaveras County Sheriff Claude Ballard.