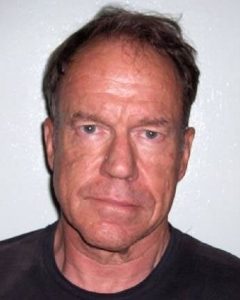 Sonora, CA — A 64 year old Berkeley attorney was arrested by the Tuolumne County Sheriff’s Office and booked into the County Jail on multiple charges Wednesday evening.

At 11:15pm Deputy Brandon Lowery discovered Michael Patrick Moore looking in the trunk of his vehicle that was parked in the Striker Court Ambulance Center parking lot. After making contact Lowery ran a field sobriety test. Moore tested positive for being under the influence of a controlled substance (methamphetamine).

Deputy Lowery also discovered several boxes of ammunition and five magazines containing ammunition in the trunk along with holsters for handguns. No weapons were discovered.

Moore was arrested and charged with being under the influence and an ex-felon in possession of ammunition. He was booked in the County Jail. He was subsequently released on $20,000 bail.