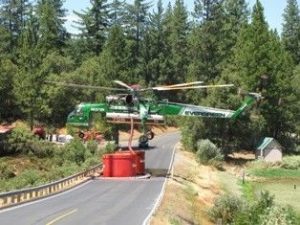 Sonora, CA — Due to the 4,500 acre Knight Fire in the Stanislaus River Canyon smoke will continue to persist in the Mother Lode due to the fire itself and the backburning effort by the more than 1,300 firefighters on site.

Pat Kaunert from the Stanislaus National Forest reports crews are making excllent progress even though the acreage continues to grow on the fire which is now listed as 40 percent contained.

Today’s activities will include improving the line on the west flank of the fire. Kaunert adds that the Mt. Knight subdivision remains the only area with structures that is potentially threatened. However a dozer line has been completed on the Mt. Knight Ridge and that has greatly increased the protection for the subdivision.