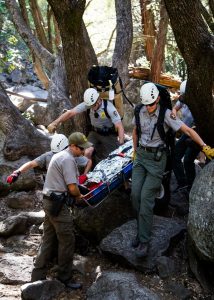 Yosemite National Park, CA – Rangers are reporting three significant incidents that include a fatality at the base of Yosemite Valley waterfalls.

A Romanian tourist, 21-year-old Lucian Miu, was reportedly climbing on wet rocks below Bridalveil Fall last Wednesday when he fell about 20 feet to the base and later died at a hospital. On Monday, another visitor took a 20-foot fall but survived.

According to park officials, in both cases, the subjects hiked to the viewing platform below Bridalveil Fall and left the established trail, bypassing warning signs that advise against leaving the trail to scramble up the boulder field toward the base of the waterfall.

For both rescues, 911 responders donned climbing helmets and approach shoes with sticky rubber soles to enable rescue operations during which times they scrambled through dangerous terrain to reach the injured subjects and provide advanced life support medical care. Yosemite Helitack, using the park helicopter (H-551), extracted the patients by short-haul and flew them to El Capitan Meadow, where they were transferred to ambulances.

The third incident, which occurred last Thursday at the base of Lower Yosemite Fall, involved a visitor who slipped off a boulder, fell into Yosemite Creek and at one point was trapped underwater between several rocks. The subject was able to escape and with the help of bystanders, get out of the water. Arriving rescuers provided medical care and carried the injured person out by wheeled litter to an awaiting ambulance.

Rangers warn that hundreds of visitors scramble the boulder fields below these waterfalls every day during the hottest months of summer. The granite boulders have been polished smooth by falling water and are extremely slippery whether dry or wet. Additionally, the boulder heights vary considerably and the consequences of falling are often overlooked or underestimated.

Over the last few years at Bridalveil Fall alone, Yosemite has documented 23 incidents in which visitors have slipped and injured themselves, 14 of which involved head injuries.

Park officials hope visitors will think twice and heed the warning signs not to leave the trails, even when they see others doing so. They add that those who venture into these areas are exposing themselves and rescuers to serious injury.