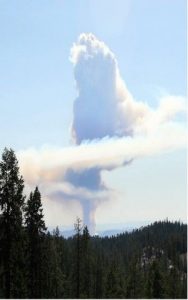 Sonora, CA — Due to the size, intensity and location of the Knight Fire smoky conditions will continue to deteriorate air quality in the Mother Lode.

According to Pat Kaunert of the Stanislaus National Forest the Knight Fire has already been classified as a "campaign" fire which means it will last for at least several burn periods or days. Officials are estimating the 275 acre fire will last through the week.

Kaunert adds that the majority of the smoke will persist in the early morning and evening hours. The only clearing period will be during the afternoon hours as the inversion layer punches off and the smoke is able to vent.

Both county health officers, Dr. Todd Stolp (Tuolumne) and Dr. Dean Kelaita (Calaveras) are adamant that individuals with asthma, emphysema or heart disease should avoid outside air as much as possible. Given the hot weather air conditioning using interior circulation should be utilized as much as possible.

For a map of the Knight Fire click here.