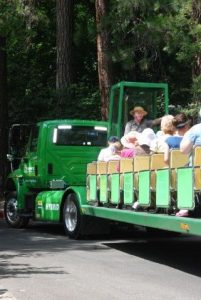 The new tractors, purchased by DNC Parks and Resorts at Yosemite, at a cost of $150,000 each, pull trailers for a two hour tour hosted by a National Park Ranger.

Acting Yosemite Park Superintendent Dan Uberauga says, “We are very proud of these new vehicles and take great pride in leading by example. Going green is incredibly important to the park.”

Around 60 were on hand for a Thursday ribbon cutting. Approximately 70,000 people take the Yosemite Valley Floor Tour each year.