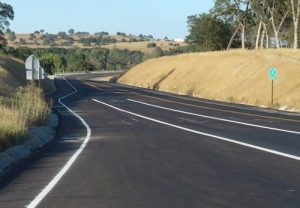 Angels Camp, CA — In anticipation of Wednesday’s opening of the Angels Camp Bypass, a kickoff celebration will be held Tuesday at four o’clock.

Darrell Slocum, President of the Calaveras Visitors Bureau Board says, “It is actually a once in a lifetime chance for people to come out and roam around on the new Highway. The next day it will be officially opened with the ribbon cutting, but on Tuesday afternoon we are going to be having a celebration.”

The event will include live music, food and a “fun run.” Free t-shirts will be available for the first 300 registrants. There will be several prizes given away, and an aerial photograph will be taken at the end of the event.

The majority of the activity will take place at the Angels Camp “entrance” to the bypass at the intersection of Hwy 4/49. Free parking can be found in the adjacent parking lots.

Meanwhile, Wednesday July 22nd’s official ribbon cutting ceremony will get underway at 10am.

Serving as the general contractor, Teichert Construction of Stockton finished the project approximately 18 months early and $5-6 million under budget.