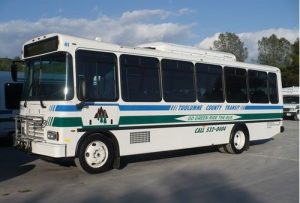 Deputy Director of Transportation Darrin Grossi states the basic fixed rate would increase from $1 to $1.50. Discounted tickets for those with Medicare or A.D.A. certification would increase to $1 from $.75.

The base ticket on the Dollar Ride System would increase from $2 to $3. Monthly passes and other ticket books would also be affected.

Still another change would see the age for seniors on the Dollar Ride program increase from 55 to 60. However Grossi adds that those with mobility impairment can still be eligible for $1 ride with A.D.A. certification.

Grossi says, “We have had no increase in fares since 1997. Since that time our operating expense has increased 42 percent. In addition the state has cut our transit operating assistance budget by over $230,000 this year. And finally we have to maintain an accepted ratio of revenue to operational costs and right now we are too close to the minimum and in some areas we are below it. That could cause the state to request us to reduce services and we know our riders don’t want that.”

One non “dollar and cents” issue deals with service which, under the proposed changes, would end at 7pm.

The proposed fare increases and change in service time would take effect August 17.