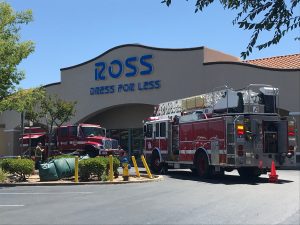 Update at 5:30 p.m.: Sonora Fire Chief Aimee New tells Clarke Broadcasting that while her crews found plenty of smoke in a clothing store on Mono Way, it was not due to a fire.

When crews arrived on the scene just after 1 p.m. after receiving a call reporting heavy black smoke coming from the back dressing room and storage area they evacuated the store immediately. Chief New details the cause, “It ended up being actually being one of the light ballasts in the back storage area. The light had short circuited and started to melt. So, it did put off some smell and some light smoke into the back storage room.”

There was no damage to the building or any injuries. Chief New adds, “We did the evacuation just for safety while we made sure that was the only source that the smoke was coming from and then after that we made sure that the electricity to that electrical outlet was turned off and released the store back to the manager.”

Original post at 1:30 p.m.: Sonora, CA — Sonora fire crews are on the scene checking a report of smoke at the Ross Dress For Less clothing store at the Timberhills Shopping Center on Mono Way in Sonora.

A report of heavy smoke coming from the dressing room area at the back of the store was called into 911. There is a lot of activity in the area.