Parades Are An Independence Day Tradition 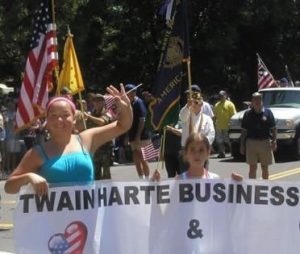 Twain Harte, CA – The streets of downtown Twain Harte were lined Saturday morning for the 3rd annual “Parade with a Harte.”

A number of service organizations took part this year and there was no shortage of classic cars. The Independence Day celebration continued afterwards with live music, children’s games and face painting.

The 27th annual Arnold Independence Day Parade started at 10am and the theme this year was “Small Town America-Stepping into the Future.”

The Mokelumne Hill Fourth of July Parade began at 11am and immediately after there were kids games, tug of war competitions and food in the downtown area.