May S.O.S. Funds Donated To Organizations 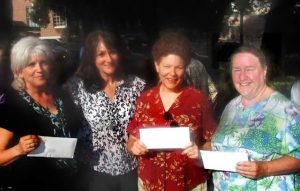 Sonora, CA — When all was said and done, $517,240 was raised during the Sonora Area Foundation’s May S.O.S. Campaign.

The checks were given out Thursday evening at a ceremony at Courthouse Park in Sonora.

$384,400 went to ATCAA, $86,000 to Sierra Senior Providers for Meals On Wheels and Interfaith Social Services received $23,840. Additionally, $23,000 will be placed in a contingency fund for unanticipated needs of the three agencies over the next year.

“This is extremely important for the families that are going to be running into economic hardships in the next couple of months and maybe for the next couple of years,” says ATCAA Housing Resource Director Beetle Barbour. “We (ATCAA) do housing resources and have been able to do some things, but this will enable us to double our efforts and really get some housing stability for the folks.”

Speaking on behalf of the ATCAA Food Bank, Director Lee Kimball says, “There are few times that you know that you have been in the middle of a miracle, and this is one of those times. Tuolumne County is the place to live.”

Kimball says ATCAA is currently providing 200 percent more food than it did in 2006 when the economic slowdown first started to show signs.

Interfaith’s Cathie Peacock says, “We will be able to triple our wood program and now serve 300 families with a cord of wood for heating purposes this winter.”

Sierra Senior Providers Board of Directors Chairperson Julie von Savoye says, “It is really going to be a help in expanding our Meals on Wheels services to areas like Don Pedro and Tuolumne and we will be able to expand the number of days we serve meals, from five to seven.”

It was noted that over 400 individuals donated money for the May S.O.S. campaign. The ceremony included a moment of silence for Sierra Senior Providers Director Randy Hunsaker who passed away earlier this month.