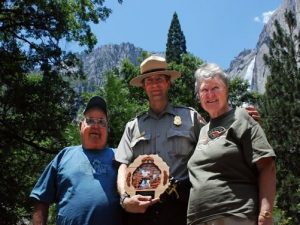 Yosemite, CA — Thankful to be alive, Huntington Beach residents James Bachman and Dorothy Hovland returned to Yosemite Thursday to present a plaque to Park Ranger Dan Abbe to show their appreciation for his heroic efforts.

Abbe rescued the pair after their truck and trailer slid off of Highway 41 and down a steep hillside on May 26th. After tumbling approximately 40 feet down hill, Bachman’s truck came to a rest on its side.

As they climbed up to the roadside the truck and trailer were completely engulfed in flames.