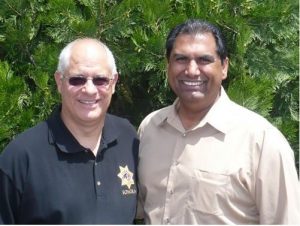 Effective July 1 Malkiat “Sam” Samra will assume the commander’s position that was held, until yesterday, by the retiring Mike Ayala.

After nearly 30 years with the CHP, Ayala spent his final day Tuesday at the Jamestown office receiving several well wishes, saying a number of goodbyes and found himself dealing with a range of emotions.

Ayala was Wednesday’s KVML “Newsmaker of the Day”.

“My future plans are to remain in Tuolumne County,” Ayala said. “I will continue to be involved in the community through the Kiwanis Club of Sonora and Sierra Bible Church. I’m sure that I will find plenty of other ways of becoming involved as well”

Ayala is married and has two daughters, one who lives in the Bay area and the other in Los Angeles.

The final words as CHP Commander was to thank all of the local agencies that Ayala has worked with over the years. Ayala said because of the close community, it has been an overall pleasure to serve.

Samra comes to the Mother Lode from a lieutenant’s position in the Modesto area. The 26 year veteran labels this opportunity “a dream come true to have command of your own office and take care of your troops and protect the community.”

Samra spent eight of his 26 years with the CHP as a Public Affairs Officer (PAO). He worked under Ayala during the mid ’80’s in the Los Banos office. Samra states his first priority is to quickly get acquainted with the community so he and his staff can better serve the county.

Samra remains thankful that the Sonora Pass Highway Corridor Project has been extended through August. This will provide the CHP with greater coverage. Samra is well aware that 12 Tuolumne County motorists have been killed already this year. Last year there were only three fatalities the entire year.