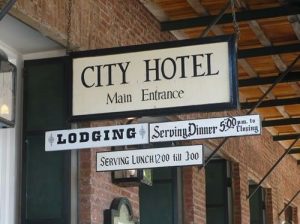 Columbia, CA — Seven businesses were forced to close their doors to the public Sunday when the contract between Forever Resorts and the state expired.

The Fallon House Theatre, operated under the Sierra Repretary Theatre umbrella, will remain open to the public. Currently playing is “The Sisters of Swing; The Andrews Sisters” starring local actress Julie Ludlum.

With the closure, 28 Forever Resorts employees, half of them fulltime, lost their jobs but according to Fancy Dry Goods & Clothing owner Lindy Miller, “Quite a few of them have already been placed and a number of them have several options.”

Miller adds, “We’re just waiting to see with this economic climate if there is any chance that any of these businesses can get reopened. All seven businesses were under one contract. We’re hoping the state will see it clear to break those up into smaller contracts that are more manageable so that we could get in three or four more independent smaller businesses to run them.”