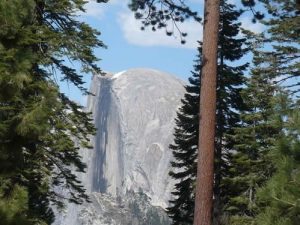 Yosemite National Park, CA — 40 year old Manoj Kumar from San Ramon has been identified as the individual who died Saturday after falling from the cables on Half Dome.

At 3:40pm Yosemite Emergency Communications Center received several 911 calls regarding an individual who had fallen. At the time of the calls individuals reported being caught in a hail storm and unable to continue with their descent.

Kumar had already reached the top of Half Dome and was descending when the accident occurred. The Park helicopter transported two rangers to the scene of the fatality. Upon arrival they accessed the victim and determined he had died from severe system trauma.

An additional team of five Park rangers were flown to Half Dome to begin the controlled evacuation of 41 visitors from the summit and cables. Many of the individuals had been unable to descend due to the incident as well as exposure to the cold and wet elements which they had experienced for nearly two hours.

The evacuation was completed by 8:15pm Saturday but it was not until 1:45am Sunday that the involved climbers had reached the trailhead.