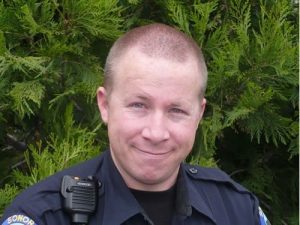 Sonora, CA — Sonora Police Officer Jeff Aitken is progressing well from injuries sustained in an accident on May 16th.

“He’s been released from Doctors Memorial Hospital and transported to a rehab center in Lodi where he will probably be at for the next couple of weeks,” says Police Chief Mark Stinson. “He’s about a week and a half ahead of schedule according to the doctors and he is upbeat and looking forward to coming back.”

Officer Aitken was injured during a vehicle pursuit on Lyons Bald Mountain Rd.